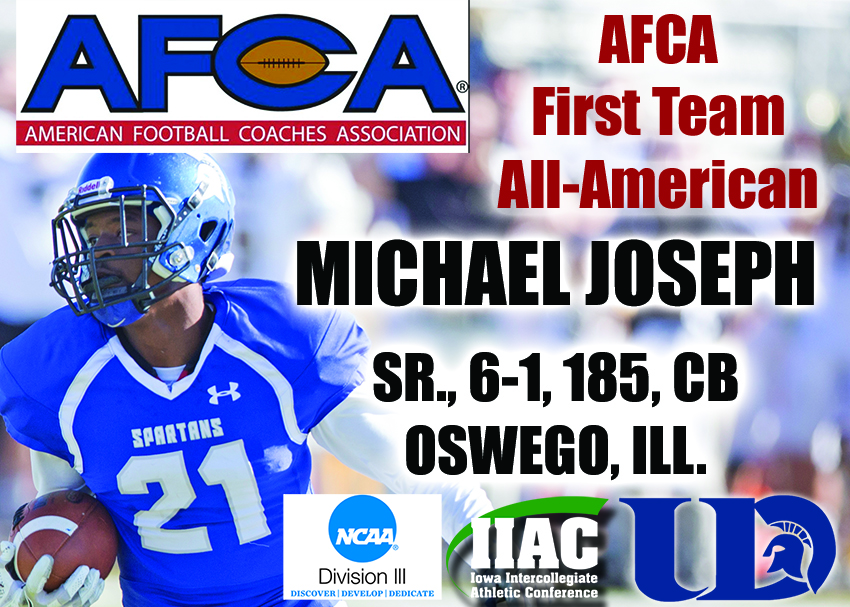 WACO, Texas — The University of Dubuque's Michael Joseph (Sr., DB, 6-1, 190 lbs., OSwego. Ill./Oswego H.S.) earned another award for the Spartans by being named to the 2017 AFCA Division III Coaches’ All-America Team announced today by the American Football Coaches Association (AFCA). Joseph was one of two Iowa Intercollegiate Athletic Conference selections by the AFCA in 2017 and the Spartans first selection since Michael Zweifel in 2011.

The AFCA has selected an All-America team since 1945 and currently selects teams in all five of its divisions. What makes these teams so special? They are the only ones chosen exclusively by the men who know the players the best — the coaches themselves.

Team Background: The AFCA has selected an All-America team every year since 1945. The five teams now chosen for each AFCA division evolved from a single 11-player squad in 1945. From 1945 until 1967, only one team was chosen.

Selection Process: The AFCA’s Division III All-America Selection Committee is made up of three head coaches from each of the AFCA’s eight districts, one of whom serves as a district chairman, along with another head coach who serves as the chairman of the selection committee. The coaches in each district are responsible for ranking the top players in their respective districts prior to a conference call between the district chairmen and the committee chairman on which the team is chosen.

Class Distinction: This year’s AFCA Division III Coaches’ All-America Team is made up of 37 seniors, 10 juniors and three sophomores.