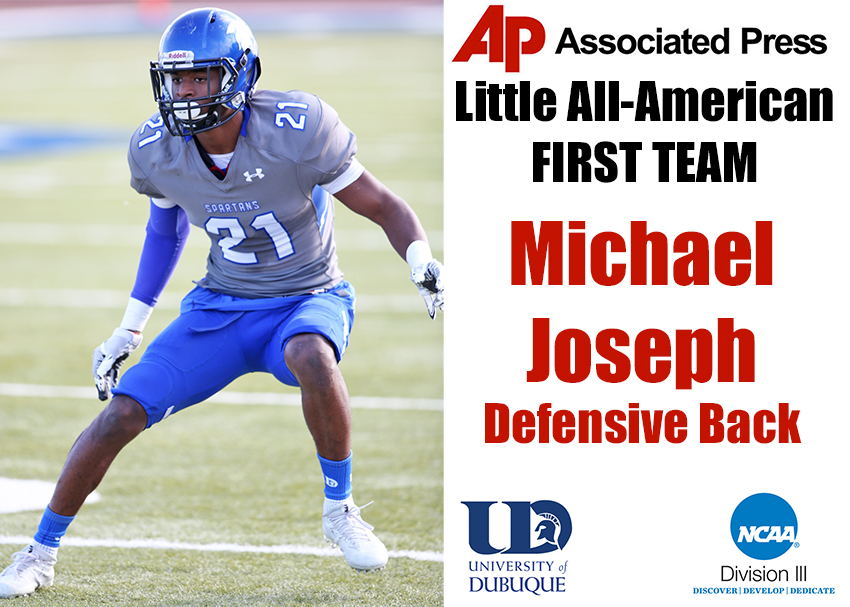 Joseph will graduate today, Thursday, Dec. 14. with a degree in sports marketing. He signed with Sportstars Inc., a full-service athlete management firm based in New York City, with satellite offices in St. Louis, MO, and Corvallis, OR, who have been representing NFL players for 30 years. Sportstars Inc. is well known for its superior track record in contract negotiations and the close personal relationships they maintain with their clients and families. Sportstars objective is to maximize the value of our clients’ contracts throughout their careers and secure their futures for life after football.

Joseph will represent the University of Dubuque, Iowa Intercollegiate Athletic Conference, and NCAA Division III in the 2018 prestigious 69th Resse's Senior Bowl which will be played on January 27th, 2018 in Mobile, Ala. at Ladd-Peebles Stadium at 1:30 p.m. (CST). NFL Network will broadcast practice recaps and highlights, as well as the game.

He is a also a nominee for the 5th Annual Cliff Harris Award named by the the Little Rock Touchdown Club and Wright, Lindsey & Jennings LLP awarded to the best small college defensive player representing more than 5.000 defensive players from almost 500 NCAA Division II, Division III, and NAIA universities and colleges. The finalists will be announced in one week and the award winner will be announced on Dec. 23 and honored at the the Little Rock Touchdown Club's annual award banquet on January 11, 2018. The winner will received the $3,000 CLIFF HARRIS AWARD trophy presented by Cliff Harris along with featured speaker NFL Hall of Famer and former Heisman Trophy Award winner Marcus Allen.