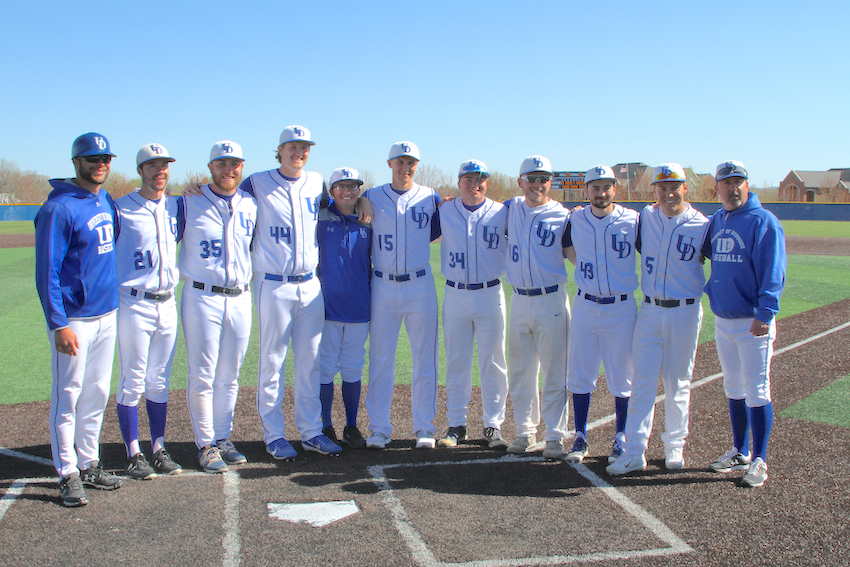 DUBUQUE, Iowa – The University of Dubuque baseball team pushed their win streak to six after sweeping Nebraska Wesleyan in dominating fashion by scores of 11-6 and 13-3.

How it Happened
-In the bottom of the first, UD deliveredback-to-back two out hits from Thomas Kempf to move JJ Valencia to third, before Zach McCoy hit a single through the right side to score Valencia and give UD the lead in the first inning.
-Nebraska Wesleyan took a play out of UD’s playbook and used a suicide squeeze to get even with the Spartans at 1-1
-Another two-out hit in the fourth inning put UD back in the lead. This time it came off the bat of Luke Carroll, who got it up into the wind stream and one hopped the left centerfield fence for the RBI double.
-Just like the previous time UD took the lead, the Prairie Wolves answered right back with a triple and sac fly in the top half of the fifth to bring the score to 2-2.
-After a leadoff single by Jack Lasswell in the bottom of the fifth, Valencia also took advantage of the strong wind to left field and drilled a double over the left fielder’s head to bring Lasswell home from first.
-The hit train continued in the bottom of the fifth for UD, as the following three hitters came up with hits with RBI knocks from Thomas Kempf and Zach McCoy to build the lead to 5-2 and knocking the Prairie Wolf starter out of the game.
-Josh Pawlowski welcomed the NWU reliever with a triple to right field, clearing the bases and expanding the UD lead to 8-2. Carroll followed with another RBI hit to plate Pawlowski, with all this happening before there was an out recorded in the fifth.
-After not scoring in the sixth, UD got back on the board in the seventh with a JJ Valencia RBI double to left center for his third RBI of the game.
-Nebraska Wesleyan made things a little interesting after scoring three runs in the top of the eighth but UD avoided any serious drama on the way to the 11-6 win.

How it Happened
-Nebraska Weselyan hopped on the board first, plating two runs in the top of the first inning to open game two of the doubleheader
-Jarad Clevenger dinged a leadoff triple down the right field line to put a Spartan on third with no one out in the second. The next batter, Josh Pawlowki blooped a single to centerfield in-between three different NWU players to get UD within 2-1.
-The Spartans bats continued to stay hot in the second inning, following Pawlowski with four singles to left field plate four more UD runs. In all the Spartans would score six runs on eight hits in the inning to burst ahead 6-2.
-The Spartans took advantage of a Praire Wolf error to get the inning alive, Kellen Mitchell singled up the middle to plate one run and Thomas Kempf capped the rally after hitting a no-doubt, home run down the right field line to make it 10-2.
-UD tacked on two more runs in the fourth inning by way of a Jordan Goldstein double to the left center wall.
-Nebraska Wesleyan cut it to a nine run game in the top of the sixth with a towering home run of their own
-A walk and a Nebraska Wesleyan error to start the bottom of the sixth put UD in a prime scoring opportunity and they took advantage with a Luke Carroll sac fly to right field to get the Spartan lead back to double digits and putting the 10-run rule into effect.

Up Next
The Spartans and Prairie Wolves will try to play the third and final game of the series on Sunday at 2:00 p.m.