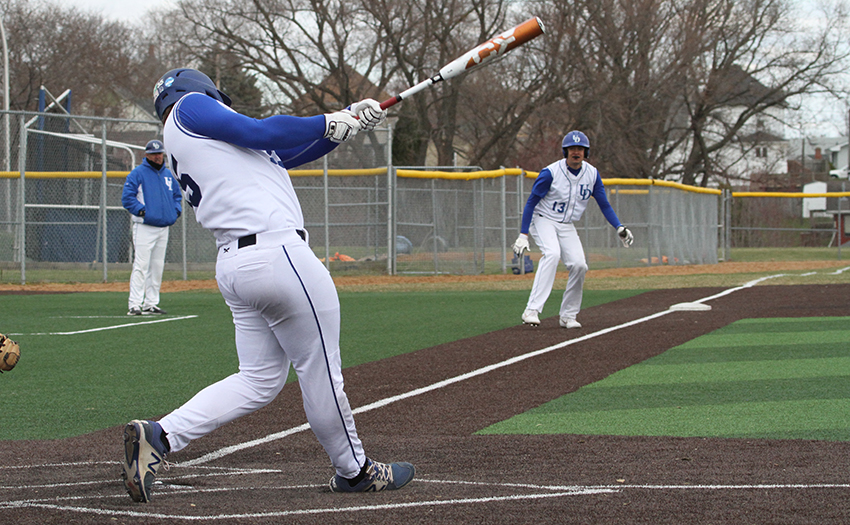 Thomas Kempf collected a two-run homerun in game three of the triple-header against Martin Luther College, UD swept the series 3-0.

DUBUQUE, Iowa – The University of Dubuque baseball team completed an unusual triple-header sweep of Martin Luther by scores of 5-0, 16-0, and 8-0. The two teams played three, seven inning games on Saturday due to weather in Dubuque on Friday.

How it Happened
-UD put up two first inning runs and never looked back. In the first inning Thomas Kempf drove in Justin Jensen on a sacrifice fly, giving him 102 career RBI, setting the UD record.
-The pitching and defense took over for the next five innings until the Spartans crept another run across on a suicide squeeze off the bat of Jarad Clevenger.
-UD got another in later in the sixth inning to make it 4-0 with a bloop single from Zach McCoy and a fifth run for good measure on a Jack Lasswell single through the right side.

How it Happened
-Just like game one, the Spartans plated the game’s first run in the bottom of the first. Jack Lasswell doubled down the right field line to begin the inning and scored when Jacob Sonnefeldt reached on an error by the shortstop.
-The Spartans did not waste any time adding runs in game two, sending nine batters to the plate for four runs with the help of three Martin Luther errors.
-UD loaded the bases with one out in the fourth and broke the game open to a 9-0 lead after scoring on two walks, a hit batter and a wild pitch.
-With one out in the bottom of the fifth, Ian Meyer drilled a pitch to deep left center, which hit the top of the fence and went over for a grand slam and to push UD’s lead to 16-0.

How it Happened
-For the third time of the day, the Spartans put at least one run on the board in the bottom of the first inning for the quick lead.
-UD then batted around for the second time of the day in the second inning. The five-run inning was highlighted by a Thomas Kempf two-run home run.
-The Martin Luther pitching staff settled down, holding the UD offense scoreless for the three plus innings until Kellen Mitchell laced a line drive into the right centerfield gap to plate a run. Mitchell would come around to score one pitch later when Thomas Kempf roped a single to right field to make it 8-0.