Bats in Game One, Pitching in Game Two, Carries UD Over Loras 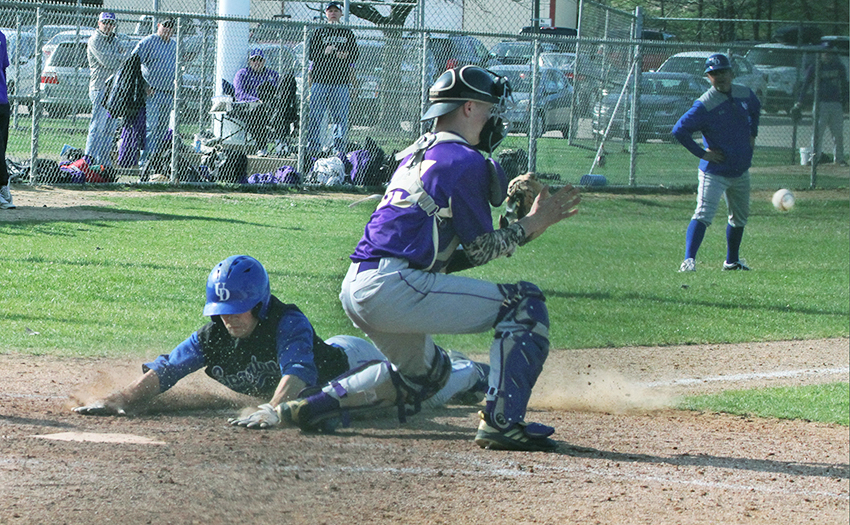 DUBUQUE, Iowa – For the third straight season, the University of Dubuque baseball team completed the season sweep of rival, Loras College, after sweeping Tuesday's doubleheader by scores of 14-2 and 3-0.

How It Happened
-Zach McCoy drilled a double to center field to begin the second inning to jump start the UD offense. After two straight outs and McCoy still standing at second, Luke Carroll delivered a single up the middle to plate McCoy and lift UD to a 1-0 lead.
-The Spartan lead did not last long as the Duhawks answered right back in the bottom half of the inning with a run of their own.
-The UD offense was patient in the top of the third, as they would draw five walks on their way to batting around and a five run frame for a 6-1 lead. JJ Valencia began the scoring in the third with a double to center field. Luke Carroll and Josh Pawlowski would each draw an RBI after walking and Jordan Goldstein brought home another after putting the ball in play to reach on a fielder’s choice.
-In the top of the fourth, Thomas Kempf added to his school record career RBI total when he singled to right field to allow Valencia to score from second, pushing the lead to 7-1.
-In the top of the fifth inning, the Spartans put up a five spot for the second time in three innings. Goldstein and Lasswell each drove in one run before Kellen Mitchell delivered the big blow and drilled a three-run home run to right field to make it 12-2.
-The Spartans bats continued to be relentless as Carroll and Lasswell both came up with RBI singles in the sixth inning.
-Carlson kept the Duhawks from scoring anymore runs and would put the 10-run rule into use after seven innings.

How it Happened
-The bats from both teams were quiet through the first three innings until Thomas Kempf drew a one out walk to get a rally started. After Zach McCoy struck out, Jarad Clevenger drew another walk which set up a bases clearing two-run double by Josh Pawlowski to right field to give the Spartans a 2-0 lead.
-The score remained 2-0 until the top of the eighth inning when three Spartans walked to load the bases with one out. UD got a little help when the Loras pitcher committed an error to allow Jack Lasswell to score but UD was only able to get the one run.
-Nathan Schneiderman, who came in to relieve starting pitcher Jordan Nelson in the sixth inning, shut down the Duhawks for the rare four-inning save. The two pitchers combined to give up just three hits in the shutout win.
-The Spartans were outhit 3-2 in the game but drew eight walks to Loras’ three.

Up Next
UD hosts their final regular season series this weekend beginning with a single game on Friday at 3:00 p.m. at Dan W. Runkle Field