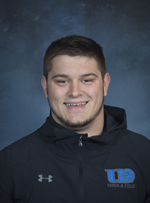 CEDAR RAPIDS, Iowa - University of Dubuque track and field athlete's Blaze Murfin and Kelsey Betthauser have been selected as American Rivers Conference Track and Field - Field Performer's of the Week.

For the second time in the outdoor season and for the seventh time total dating back to indoor season, Blaze Murfin (Dallas City, Ill,/Illini West) has been named American Rivers Conference Track and Field – Field Performer of the Week. Murfin battled against Division I competition all weekend as he took part in the shot put, discus and hammer throw at the Drake Relays. Murfin finished in the top half off all three events, beginning with the shot where he finished 11th (17.47m/57-3.75). He also went on to finish eighth in the discus (53.01/173-11) and 12th in the hammer with a school record throw of 58.62m/192-4.

Kelsey Betthauser (Ellsworth, Wis./Ellsworth) has been selected as American Rivers Conference Women’s Track and Field – Field Performer of the Week after her performances over the weekend at the Drake Relays and Grand View Vikings Classic in the discus. At the Drake Relays against Division I competition, she threw 40.83m/133-11 to finish 27th. At the Grand View Vikings Classic, she threw a school record 48.24m/158-3, which is now the top mark in all of NCAA Division III. This is the first time in Betthauser’s career that she has been name field performer of the week.