Greg Krulas working on the fall in his second match of the day. He would win the match 7-2 and reach the championship semifinals. 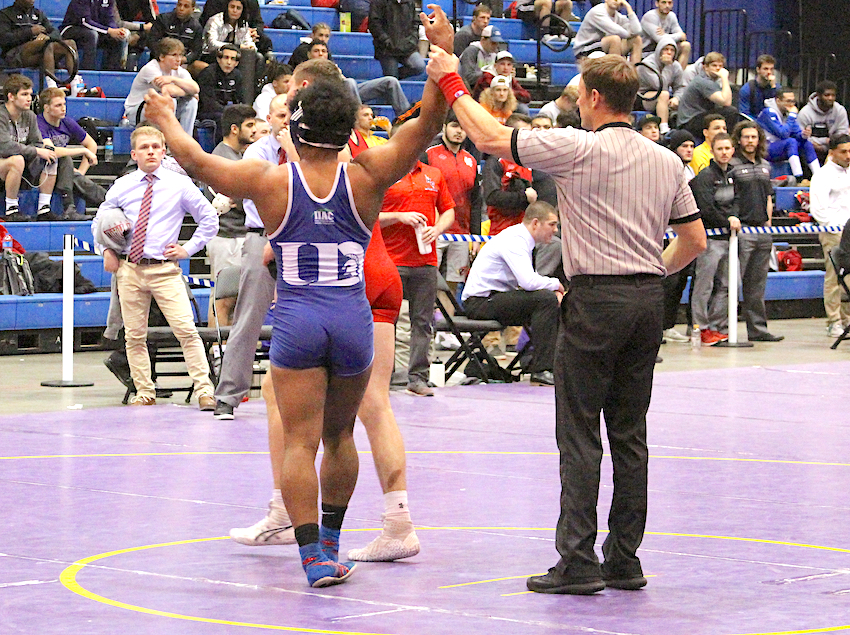 DUBUQUE, Iowa - The University of Dubuque wrestling team finished the first day of the 2019 NCAA Division III Lower Midwest Regional with a pair of semifinalists. The Spartans finished 2-0 at 149 lbs. when Greg Krulas (Jr., Freeport, Ill./Dakota H.S.) captured a fall in the opening round in :56 over Nebraska Wesleyan University's Kendrick Frazier. He won 7-2 in the second round over Sean Sax of Westminster College to reach the championship quarterfinals. He will meet Kevin Kelly of Loras in the semifinals who also won his match by a 7-2 score.

Tevin Bailey (So., Reno, Nev./Damonte Ranch H.S.) pinned Loras College's Samuel Schuler in the first period of the opening match in 2:05. In Bailey's second round match, he battled for a hard fought 12-9 victory over Griffin McBride of Huntingdon College to reach the championship quarterfinals. He will face Cornell College's Bryce Oveson in the semifinals who won a sudden victory match 3-1 over Wartburg's Isaiah Cox.

Meet will begin at 11 a.m. on Sunday, Feb 24. The Spartans have two individuals in the d3wrestle.com rankings from Feb. 6, 2019: Greg Krulas is an Honorable Mention at 149 lbs. and Ethan Cain is Honorable Mention at 197 lbs. The top-three place winners will advance to the 2019 National Championships held in Roanoke, Va. on March 8-9, 2019.